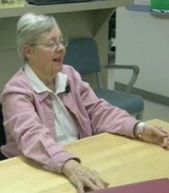 Raelene (Rae) Kupferschmidt suffered a massive cerebral haemorrhage in January 2008, and doctors diagnosed her as “brain bead”. She was taken home to die and her family began making funeral arrangements. Family and friends were saying their last goodbye, when her daughter , Lisa, put an ice cube onto Rae’s dry lips. Immediately, Rae sucked the ice cube. And then another.

Lisa leaned down and spoke to her mother, saying, “Mom … Mom, are you in there?”. To her surprise, Rae nodded her head and answered “Yes”. Lisa told Associated Press that ‘we all just about fell over.’. This 65 year old woman, whom the doctors had written off as supposedly “brain dead”, was in fact alive and needing proper healing treatment. Rae was rushed back to hospital, where she underwent surgery to remove a blood clot. She recovered and then underwent physiotherapy to help her walk.

Rae is alive thanks to the love and concern of her family. But no thanks to the doctors who were so ready to reduce here to the status of “dead”, when she was clearly still alive and breathing.