“Don’t cut me open — don’t hurt me! Let me wake up!.” While doctors hovered over her bed… discussing organ donation, Christina Nichole could hear every word they said – and their conversation terrified her.

Christina Nichole suffered severe hypoglycemia (her blood sugar levels dropped) on July 15, 2004 after taking the medication Zyprexa and she lapsed in and out of coma. Doctors transferred her to Sacred Heart Medical Center, Spokane WA and placed her on life support in Neuro ICU. Doctors could only theorise as to what caused her condition. Then Christina was paralysed with powerful drugs to prevent her hyperventilating. 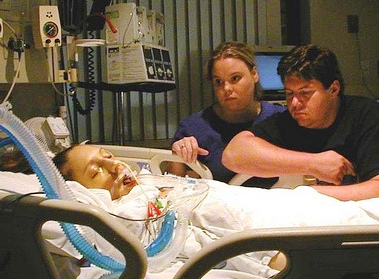 After only six days, Dr. Bender, Head Neurologist for Christina during her coma, and Dr Palukuru reported that she had “severe global brain injury” and, diagnosed her as “brain dead” with no chance of recovery. They recommended “reduction in the level of care” and no further tests. (Facts based on medical report viewed 17 November 2013 at http://pekingeseshihtzu.wordpress.com/christina-nicholes-coma/)

Christina was paralysed and could not move or cry out or respond in any way to any communication, but her mother refused to give up on her and knew that her daughter was actually still alive. “I knew she was still in there and I started working to prove that”, Judy Thornsberry told the South Beach Bulletin. But it wasn’t easy to convince doctors, who started pressuring Christina’s parents to donate her organs. The family reports that:
Doctors thought that Christine was dead, but she was actually alive and heard every word they said

It was clear that they wanted to kill her and harvest whatever they could from her body because they harassed us for 10 days to sign papers to allow them to do that. Why did they want her dead? Government insurance? Body parts on the market? We want answers and no one wants to answer the questions.

While doctors hovered over her bed… she (Christina) could hear every word they said – and their conversation terrified her. They were talking about harvesting her organs for transplant! They said she was brain-dead – no chance she’d ever recover. But they didn’t realize that although she couldn’t move or speak Christina was still very much alive.

The National Enquirer reports that “Judy stayed at her daughter’s bedside for days to watch for signs that there was life inside her frozen body.” She urged her to blink. Then she felt a tiny movement of Christina’s eyelids. Doctors told Judy that she was ‘imagining’ it.

But Judy persisted, and asked Christina questions, to which she blinked once for Yes and twice for No. Still the doctors dismissed these signs as merely ‘spontaneous movements’.

Then, after ten days in coma, Christina made a clear sign to doctors that she was still there inside her body… very much alive and aware of what was happening to her:

Mom told me… to squeeze the neurologist’s finger. She put my hand around his finger, and I squeezed with all my strength ‐ and felt him pull away!
(Christina recalled for the National Enquirer)

From that moment everything changed and the doctors and staff began treating Christina as a patient instead of a corpse. “ They started fighting for Christina’s life instead of just her organs”, Judy told the National Enquirer.

Christina was transferred to rehabilitation, and within six weeks she was well enough to go home. Thank God she had a mother who would not give up on her in her hour of desperate need.

See also: (“The girl who wouldn't die: Incredible story of the 19-year-old who woke up as doctors were preparing to harvest her organs” by Sara Malm (DailyMail), October 17, 2012 at MailOnline . Viewed October 22, 2012 at http://www.dailymail.co.uk/news/article-2219085/Carina-Melchior-The-girl-wouldnt-die-Miracle-Danish-girl-woke-doctors-prepared-organs-donated.html )