A 27 year old man suffered a massive stroke in January 2015 and was admitted to a local Houston TX hospital where he was put on life support. It wasn’t long before doctors said that there is “no hope” of recovery and declared George Pickering III ”brain dead”.

George’s mother and a brother were satisfied with the diagnosis by Tomball Regional Medical Center, and they agreed to doctor’s plans for a “terminal wean”, which would gradually remove life support from the supposedly ”brain dead” patient. Furthermore, George was a registered “organ donor”, so doctors likely wanted to harvest his organs.

“I felt hopeless. They were moving too fast. The hospital, the nurses, the doctors.”

But the young man’s desperate father, George Snr, 59, would have none of it. He felt certain that his son was not really “dead”, and realised that he needed to take action. Armed with a gun, he entered his son’s hospital room and demanded that everyone leave the room, before they could remove the life support. “I felt hopeless. They were moving too fast. The hospital, the nurses, the doctors” the dad later said. 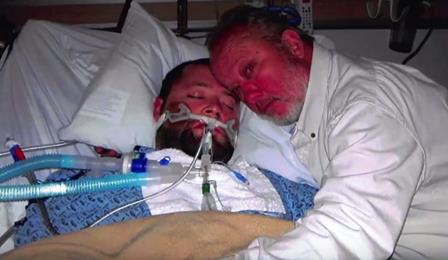 A struggle ensued followed by a three hour siege in the hospital, but eventually George Snr surrendered and police moved in to arrest him. He later said:

During that three hours, George squeezed my hand three or four times on command… I knew my son was not brain dead… I’m his father. I would’ve felt something.

That same night, the young man George Pickering III woke up! He greeted his family members. He later said:“There was a law broken, but it was broken for all the right reasons. I’m here now because of it. It was love, it was love.… It’s the duty of a parent to protect your children & that’s all he did.”

“It’s the duty of a parent to protect your children & that’s all he did.”

The young man has now full recovered and went home to his family, grateful to be alive and thankful for his father’s determination to save him from the organ harvesters.

Life Site News reports that an increasing number of experts have begun calling into question the “brain death” criteria for determining death. They argue that “brain death” is an arbitrary set of criteria developed largely to ensure the usability of organs harvested from such patients, as well as to decrease the medical costs involved in keeping “brain dead” patients alive on life support.

(From “Texas dad released from jail after armed standoff at hospital to save son, who made miraculous recovery after being near death” by David Boroff & Laurie Hanna at NY Daily News. Viewed Jan 30, 2019 at https://www.nydailynews.com/news/national/texas-man-released-jail-siege-save-son-life-article-1.2474678 )

(plus “Doctors Tried to Take This Texas Dad’s Son Off Life Support — He Went to Jail to Save His Life” by Carly Hoilman at Faithwire.com. Viewed Jan 30, 2019 at https://www.faithwire.com/2018/05/03/doctors-tried-to-take-this-texas-dads-son-off-life-support-he-went-to-jail-to-save-his-life/ )

(plus “‘It’s the only reason I’m here now’: Son awakens from ‘brain-dead’ state …” by Evan Bleier for DailyMail.com. Viewed Jan 30, 2019 at https://www.dailymail.co.uk/news/article-3371236/George-Pickering-II-standoff-Tomball-Regional-Medical-Center-Houston-brain-dead-son.html )