Doctors said she was “brain dead” after night of binge drinking

Hanna Lottritz, 20 years old, was out drinking with friends in July 2015 at the “Night in the Country” music festival in Yerington Nevada. She was “chugging” beers and whiskey in a dangerous binge drinking “competition”, when suddenly she collapsed and stopped breathing. 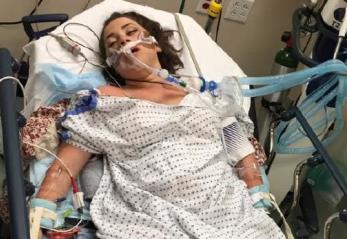 Her friends immediately carried her to a medical tent where she was intubated and rushed by air to Renown Hospital in Reno NV. Doctors feared the worst. Hanna later said:

I was in critical condition, suffering from acute respiratory failure and acute alcohol intoxication. My blood alcohol concentration was .41 when I arrived at the hospital, five times over the legal limit.

Hanna wrote about her shocking experience in an online blog, saying “The doctors thought I was brain dead because I was completely unresponsive.… My pupils were sluggishly reactive, I had no corneal reflex and I wasn’t responding to verbal or painful stimuli.” [OR Maybe doctors also thought about harvesting her organs.]

“The doctors thought I was brain dead because I was completely unresponsive.”

Fortunately, Hanna proved them totally wrong… waking up later that night, some 24 hours after admission. In her blog, she says:“I felt like I was dreaming. Everything seemed foggy. I drifted in and out of consciousness for the next few hours. I was coming out of a 24-hour coma.”

Doctors and nurses later told her how lucky she was to be alive. Hanna says: “They told me that they didn’t think I would make it through the night.”

“They told me that they didn’t think I would make it through the night.”

Hanna’s blog urges young people not to engage in binge drinking. She says: “Please try to avoid binge drinking and heavy drinking because the consequences are not worth it.… Watch out for friends, family, even strangers, and take care of them when you suspect they might be suffering from alcohol poisoning. Know the symptoms and be safe.”

(From “‘The Doctors Thought I Was Brain Dead’ Student Hanna Lottritz Warns Of Binge Drinking Dangers” by Lucy Sherriff at The Huffington Post UK. Viewed Jan 30, 2019 at https://www.huffingtonpost.co.uk/2016/01/08/student-hanna-lottritz-warns-of-binge-drinking-dangers-in-moving-blog_n_8936958.html? )

(plus “Hanna Lottritz’ account of binge that almost killed her goes viral” by Rohan Smith at news.com.au. Viewed Jan 30, 2019 at https://www.news.com.au/lifestyle/real-life/true-stories/hanna-lottritz-account-of-binge-that-almost-killed-her-goes-viral/news-story/4936bed049f2a9e58a6a236d6921f5d2 )