Heart attack patient declared “Brain dead” … and then she recovers when taken off life support.

57 year old Michele De Leeuw of Michigan suffered a sudden heart attack and stopped breathing in August 2018. It was 15 minutes before paramedics could arrive at her home and resuscitate her. 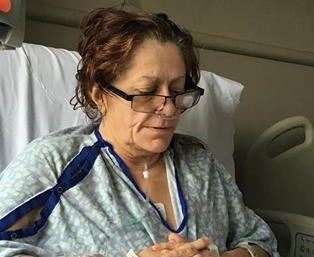 When my father called me … he felt that she was dead.

Her husband Karl was informed of all this and decided to phone their children to come to the hospital, for what might be their final goodbyes. NBC reports that their daughter said: “When my father called me after she was rushed to the hospital … he felt that she was dead”.

The family waited for a few days to see if there was any improvement in Michele’s condition, but nothing changed. The doctors also felt that there was no hope of recovery. After 3 weeks, the doctors told Karl: “the woman that you know as your wife is not there anymore,”, so he decided to unplug the ventilator. (Quote from Dearly.com, article cited below.)

Minutes later, Michele showed signs of recovery and actually started to breathe on her own. This was considered “impossible” by the doctors, and they still thought that she would die. Michele was moved to a hospice to live out her final hours or days.

within a week, she was sitting up, talking and feeding herself.

But she kept on improving and, within a week, she was sitting up, talking and feeding herself. She underwent heart surgery, and weeks of speech therapy and physiotherapy. After four months, Michele was back home with her family and had nearly fully recovered.

This is another example of the imprecise and unreliable character of so-called “brain death”. In reality, it is not true death. Patients and their families would be well advised to never abandon your loved one to the so-called “doctors” or organ harvesters, when they diagnose supposed “brain death”.

SAVE YOU LIFE. SAY “NO” TO ORGAN DONATION AND ORGAN HARVESTING!

“Mother-of-two who was left brain-dead by shock heart attack wakes up moments after she was pulled from life support ‐ and four months later she’s fighting fit” by Natalie Rahhal, Deputy Health Editor for DAILYMAIL.COM, viewed online 8 April 2019 at: https://www.dailymail.co.uk/health/article-6465309/Mother-two-thought-brain-dead-wakes-just-life-support-pulled.html