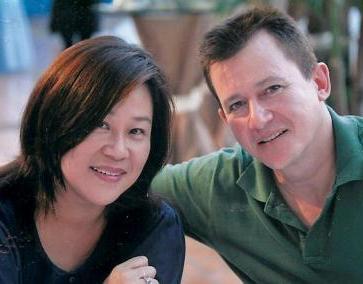 The day began as normal for Hong Kong lawyer, Suzanne Chin, and her family… getting the kids off to school, then a short jog with their pet dog. However, after about ten minutes walking, she developed symptoms of ill health and decided to return home. Suzanne later suffered cardiac arrest and became unconscious. Her husband, John Alabaster, called for an ambulance, and she was taken to hospital.

Her brother, Dr Alan Chin in Singapore, was also notified, and he immediately flew to her bedside. He learned that:

… on arrival at 8:38am, she lapsed into unconsciousness with an unrecordable blood pressure. The doctors commenced resuscitation which lasted about 2 hours”. After further procedures, “She was transferred to ICU after she had been stabilized.( *1 )

Later, when Alan arrived at the hospital, he noted that:

When I saw Suzanne in ICU, she did not look good. She was on a ventilator; her pupils were 4mm fixed and dilated. Her limbs were flaccid. The respiratory physician advised that the prognosis was very poor with evidence of brain stem death and pituitary gland failure. The room temperature in ICU was kept low to slow down the metabolic processes. ( *1 )

The following day, Suzanne’s condition had not improved and the temperature in the Intensive Care Unit was turned back up, possibly as a subtle hint that hospital doctors had given up. Dr Chin says: “The respiratory physician again advised that there was no improvement and confirmed that Suzanne had brain stem death (BSD)”( *1 ). The physician “… advised John (Suzanne’s husband) to consider switching off the ventilator as Suzanne was now dead and there was no hope of recovery”( *1 ). Alan also reports that the physician also (falsely) claimed that “… in medical history there were no cases of anybody recovering from BSD”.( *1 )

… head of ICU, two neurologists and a cardiologist said she was brain-dead with no hope of recoveryFortunately, Suzanne’s husband John and her brother Alan were both Christians, and they did not give up on her, and they refused to give in to the pressure for them to ‘switch off the ventilator’. Instead John and Alan prayed for Suzanne’s recovery and also called on their Church friends to pray. They also requested a second opinion from a neurologist, but his diagnosis only confirmed the hospital’s diagnosis of “brain death”.

In short, the head of ICU, two neurologists and a cardiologist said she was brain-dead with no hope of recovery. Mr Alabaster recalled mounting pressure from the medical staff treating his wife to “put Suzanne – and ourselves – out of our misery by switching off machines that were keeping her alive”( *3 ). Even when she made an occasional twitch, they quashed his hopes by insisting that it was purely a reflex. Their talk always returned to “saying goodbye” and “letting go”( *3 ).

Yet, in spite of the hospital’s scepticism, Suzanne continued to show signs of life. Dr Alan Chin reports that:

On Thursday 23 April, while being reassessed by her neurologist, John asked Suzanne to nod her head if she understood him. She did so. He then asked her to nod her head twice as the doctor was skeptical. Again she did so.
By Friday 24 April, Suzanne was fully conscious and able to recognize all who visited her.( *1 )

three days after being labelled “brain-dead”, Suzanne continued to show signs of life & then she recovered.Singapore Straits Times reports that: “She recovered within a week and left the hospital. Today, she is living in Singapore, still working as a lawyer, still a wife and mum. She is well, and she is alive.” ( *4 )

As Melissa Caulk ponders, “Why are stories of people waking up from brain death not reported here in the United States?”( *3 ) And I also ask: Why is it not more widely reported by Australia’s media? When will they expose the truth about the highly questionable nature of “brain death”? Brain death is not true death.

*4: (plus “Lawyer declared brain dead wakes up after calls to pull plug on her” by K.c. Vijayan at The Sunday Times (Straits Times). Viewed April 14, 2013 at http://www.straitstimes.com/breaking-news/singapore/story/lawyer-declared-brain-dead-wakes-after-calls-pull-plug-her-20160324 )