Nebraska “miracle man” was declared “brain-dead” only to wakes up 2 days later!

Former basketball announcer, T. Scott Marr, turned 61 in December 2018. The next day he was found slumped and unconscious on his bed. His son said that he was barely alive.

Marr was rushed to Methodist Hospital in Omaha, Nebraska, and placed on a breathing machine in intensive care. Doctors diagnosed a “stroke” and thought that Marr’s condition was “irreversible” and that it would lead to “brain death”. Distraught family members were facing the prospect of his death and began planning a funeral.


After being unconscious for more than 48 hours, T. Scott Marr unexpectedly woke up after his doctors thought there was no hope of recovery and his breathing tubes were pulled out.
(Video courtesy of NBC Nightly News)

After two days, Marr showed no apparent signs of neurological improvement. He had a lot of swelling on the back of the brain. Sunny Skyz reports: “After being unconscious for more than 48 hours, T. Scott Marr unexpectedly woke up after his doctors thought there was no hope of recovery and his breathing tubes were pulled out.” (Quote from article cited below.)

Marr was still breathing on his own after the respirator was removed and switched off. The hospital phoned his four children with this news and they came to the hospital. Preston Marr, his daughter, says that when they arrived, they were amazed. She spoke to her Dad, and he responded with a smile. She asked him to move his thumbs, and he slowly moved his thumbs. Then she asked him to move his toes, and he wiggled them slightly. The doctors realised that they had mis-diagnosed Marr’s condition, so they ordered more tests. 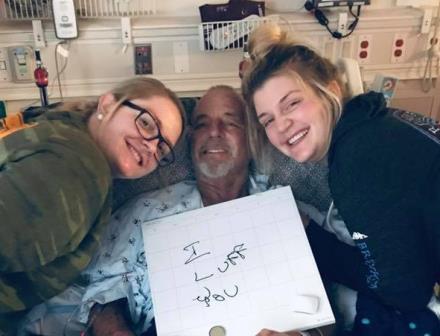 It turns out that their patient was not “brain dead” as previously thought. In fact he was suffering a very rare and poorly understood condition known as “posterior reversible encephalopathy syndrome” (PRES), which is “… often linked to high blood pressure”. (Quote from Fox News in article cited below)

Apparently the severe swelling that Marr was suffering is not usually associated with PERS, which is why doctors initially thought he had suffered a stroke. Marr is now making a steady recovery.

After a few weeks of physiotherapy, speech therapy and occupational therapy, Marr was able to return home in January 2019. Preston reports that he needs constant supervision, as his brain went through a lot and needs retraining, but he is able to feed himself, and, as videos demonstrate, he walks and talks well.

Thank God for T. Scott Marr’s ‘miraculous’ recovery and a loving family at his side to support him. This case demonstrates, once again, that “BRAIN DEATH” IS NOT TRUE DEATH… it is an imprecise and mistaken concept that endangers the lives of patients who suffer brain injury.

SAVE YOUR LOVED ONES… SAY “NO” TO ORGAN DONATION AND ORGAN HARVESTING.

“Nebraska Dad Wakes Up After Being Declared Brain Dead By Doctors” by Sunny Skyz, viewed online 10 April 2019 at: https://www.sunnyskyz.com/good-news/3168/Nebraska-Dad-Wakes-Up-After-Being-Declared-Brain-Dead-By-Doctors

“Miracle man who was declared ‘brain-dead’ wakes up after his family turned off life support - and he’s now home and thriving” by Associated Press, viewed online 8 April 2019 at: https://www.dailymail.co.uk/health/article-6558489/Man-thought-nearly-brain-dead-recovers-leaves-hospital.html