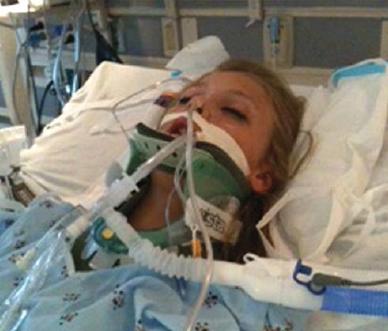 Doctors claimed that an Iowa teen’s brain had turned to “mush” and that they were 95 to 99 percent certain that she would never wake up again. They advised the family to make funeral arrangements.

Taylor Hale and another girl were fooling around with some friends after a football game on September 11, 2011, when they hopped onto the hood of a car for a joke. Suddenly the car reversed and the girls fell off the hood. The other girl was okay, but Taylor’s head hid the pavement and she suffered a fractured skull and traumatic brain injury.

She had brain swelling, so doctors at Des Moines Blank Childrens Hospital put her into a medically-induced coma to aid healing. For days, machines monitored her condition and sympathetic visitors came and went. A week later she suffered a brain haemorrhage and her brain partially slid down into the spinal canal, which alarmed doctors. They considered this “irreversible brain damage” and declared Taylor Hale “brain dead”. They told the family “There is nothing more we can do for her. You should probably say goodbye.” They asked the family to consider donating her organs and to make plans for a funeral.

Doctors were 95 to 99 percent certain that she would never wake up againA Christian friend called by and prayed with the teen. Later that day the doctors took her off medications and life support. But she was not truly dead, and started to struggle to breath on her own. She slowly began to revive and for several hours her brain activity improved and she awoke and tried to talk. NBC News reports: “Taylor opened her eyes and moved her fingers and toes.”

Apparently the doctors were still skeptical of her recovery and expressed their doubts that she would ever walk again or be able to live without a feeding tube. But doctors don’t know everything, and Taylor continued to improve and recover from her traumatic brain injury. The Daily Mail reports that “Taylor spent the next several months re-learning how to do everything, from eating on her own to walking and talking.”

She found it very painful and stressful, but told local radio KCCI: “I pushed through it because you just got to do what you got to do.” Taylor eventually returned to school and worked hard to pass tests and catch up on lost time, so that she could graduate her course with all her other classmates. Today she is a healthy high school graduate and has even learned to drive a car. This courageous young woman is another survivor of so-called “brain death”… a living testimony of the ability of brain injury patients to recover.

(see also “Iowa teen declared brain dead miraculously recovers, fights her way to graduate high school on time: 'I kept pushing through it.'” by Melissa Chan, NYDailyNews, , 15 May 2015. Viewed 16 May 2015 at: http://www.nydailynews.com/news/national/iowa-teen-declared-brain-dead-recovers-fights-graduate-article-1.2222417 )

& (see also “'It was the hand of God': 'Brain-dead' girl who was pulled off life support AWAKES from coma after chiropractor's prayer session and makes a full recovery” by Snejana Farberov, Daily Mail Online, 15 May 2015. Viewed 16 May 2015 at: http://www.dailymail.co.uk/news/article-3081882/It-hand-God-work-Meet-brave-teenage-girl-suffered-irreversible-brain-injury-pulled-life-support-awoke-coma-recovery.html )