A 59 year old woman came back to life, after being clinically “brain dead” for 17 hours! 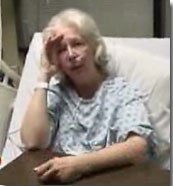 Val Thomas had a heart attack at her West Virginia home on May 17, 2008 and was taken to a Charleston hospital. Attempts to revive her seemed to be getting nowhere, as her heart kept stoppng and doctors could not detect any brain activity. They diagnosed her as “brain dead”.

Val was placed on a ventilator, to maintain breathing and preserve her vital organs, while the family discussed the possibility of organ donation (ie: harvesting of Val’s organs for transplanting into others). The decision was taken to switch off life-support. Ten minutes later, “she moved her arm, coughed and asked for her son.”, Ninemsn reports.

This supposedly “brain dead” woman was actually alive, even tough doctors were not capable of detecting her brain activity. Ironically, it was the decision to keep her on life-support for organ preservation that ultimately saved her. If the surgery had proceeded, Val would have died a real death because of organ removal (… not from so-called “brain death”).

Ninemsn reports that Val should make a complete recovery “to the surprise of her doctors”.

LifeSiteNews reports that there is still controversy and debate about the “the issue of brain death criteria for purposes of organ transplants and determining the exact moment of death has been a source of contention since organ transplants became common. Controversy continues to swirl around the issue as patients in apparently hopeless comatose conditions continue to confound doctors’ expectations and awaken.”

“The problem is time and the rapid deterioration of most vital organs after the cessation of heart function. After death, corneas and bone marrow can still be used but soft vital organs such as the heart, lungs, pancreas and kidneys rapidly deteriorate and are unusable within a few hours. Traditional medical ethicists contend that soft and easily damaged organs such as the heart are impossible to obtain morally since they deteriorate more quickly and must be removed when a patient’s condition is still disputed.”

(Based on “Woman‘s Waking After Brain Death Raises Many Questions About Organ Donation” by Hilary White, LifeSiteNews.com. Viewed Dec 20, 2010 at: http://www.lifesitenews.com/news/archive/ldn/2008/may/08052709 )