TORONTO, November 1, 2011 (LifeSiteNews.com) – Because organ donors are often alive when their organs are harvested, the medical community should not require donors to be declared dead, but instead adopt more “honest” moral criteria that allow the harvesting of organs from “dying” or “severely injured” patients, with proper consent, three leading experts have argued. 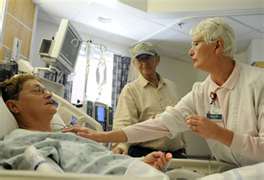 This approach, they say, would avoid the “pseudo-objective” claim that a donor is “really dead,”which is often based upon purely ideological definitions of death designed to expand the organ donor pool, and would allow organ harvesters to be more honest with the public, as well as ensure that donors don’t feel pain during the harvesting process.

The chilling comments were offered by Dr. Neil Lazar, director of the medical-surgical intensive care unit at Toronto General Hospital, Dr. Maxwell J. Smith of the University of Toronto, and David Rodriguez-Arias of Universidad del Pais Vasco in Spain, at a U.S. bioethics conference in October and published in a recent paper in the American Journal of Bioethics.

The authors state frankly that under current practices donors may be technically still alive when organs are harvested – a necessary condition to produce healthy, living organs. Because of this, they say that protocol requiring a donor’s death is “dangerously misleading,” and could overlook the well-being of the donor who may still be able to suffer during the harvesting procedure.

“Because there is a general assumption that dead individuals cannot be harmed, veneration of the dead-donor rule is dangerously misleading,” they write. “Ultimately, what is important for the protection and respect of potential donors is not to have a death certificate signed, but rather to be certain they are beyond suffering and to guarantee that their autonomy is respected.”

Instead of the so-called Dead Donor Rule (DDR), the authors propose that donors should be “protected from harm” (i.e given anesthesia so that they cannot feel pain during the donation process), that informed consent should be obtained, and that society should be “fully informed of the inherently debatable nature of any criterion to declare death.”

The doctors note that developing the criteria for so-called “brain death,” which is often used by doctors to declare death before organ donation, was an “ideological strategy”aimed at increasing the donor pool that has been found to be “empirically and theoretically flawed.” They also criticize the latest attempts to create new, even looser definitions of death, such as circulatory death, which they argue amount to simply “pretending” that the patient is dead in order to get his organs.